AUTOMOBILE ENTHUSIASTS in the city were in for a treat on Sunday as Chief Minister Uddhav Thackeray flagged off the vintage car rally at Bandra Kurla Complex (BKC). The rally, supported by Maharashtra Tourism Development Corporation and Things 2do, had 130 vintage cars and 65 two-wheelers, as per Western India Automobile Association (WIAA).

The rally from BKC to Ballard Pier included 10 vintage Rolls Royce vehicles that later cruised on Bandra-Worli Sea Link, painting a vibrant picture on a nippy Sunday morning. The string of vintage beauties kept shutterbugs busy with many trying to get their best shot against the sea link or a selfie in front of the car line-up at BKC.

Nitin Dossa, executive chairman of WIAA, said the event had brought much-needed cheer to car enthusiasts. “This was the biggest event in Maharashtra in the automobile sector since (the Covid-19 pandemic). It was carried out following safety protocols and maintaining distance. There were smiles on many faces,” Dossa said. 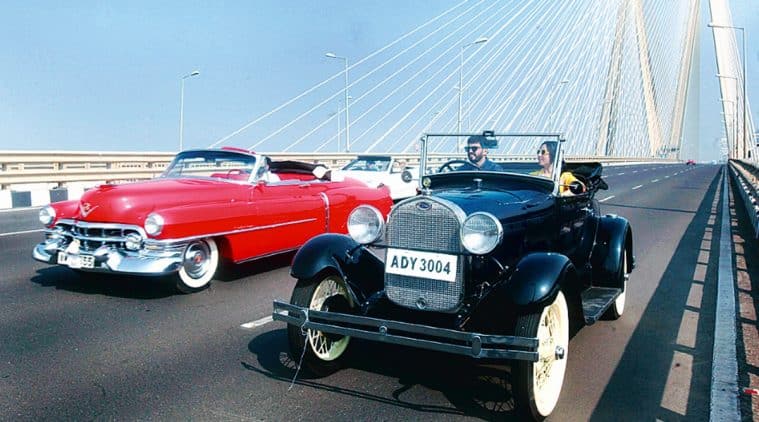 Among the many attractions at the rally were rare cars, including a 1934 Packard 8 Tourer, a 1948 Lincoln v12 and a 1961 Ford Thunderbird from Viveck Goenka, chairman, The Indian Express Group, and a 1912 Detroiter, a 1912 Wolseley and a 1927 Rolls Royce from Gautam Singhania, chairman and managing director, Raymond Group. The collection was displayed along with 2018 Pebble Beach winners Amir Ali Jetha’s Rolls Royce, Nishant Dossa’s Alvis and Jagdish Thackersey’s Bentley, the WIAA said.

The WIAA also said Yohan Poonawalla’s Bentley MK vi, ex Mysore, was “stunning”, along with his other cars that included Pope Paul’s Lincoln.

Veteran drivers Dasturji Dadachanji in his favourite Morris 8 and Russi Jeejebhoy in his Chrysler 1947 convertible added a spark to the rally. The youngest driver taking part in the rally was 18-year-old Rya Jetha with a one-week-old driving licence. Hiral Dossa, in the all-women’s team, drove the Bentley Mk Vi ex Mysore. Driven by Rajjusingh Rajput and owned by Salman Vora, the 1914 Ford T Speedster was the first car to be flagged off.

Two-wheelers led by Anil Bhingarde on his Triumph and Siyali Bhiwandikar on her Vespa were also among other draws. Among the more familiar sights on Indian roads from the recent decades in the last century were a Maruti Suzuki 800 SS 80, a 1989 Fiat Premier Padmini and a 1984 Ambassador.

Relations with Indrani turned sour; did not consider her my parent: Rahul Mukerjea | Mumbai News

Relations with Indrani turned sour; did not consider her my parent: Rahul Mukerjea | Mumbai News

This Website Is For Sale – For Details Please Call 360 256-1117 or email thewaymarketing88@gmail.com

Your email is private with us and will never be shared.