Of all calls to Mumbai Fire Brigade, only 30% report fire

ONLY ABOUT 30 per cent of the calls to the Mumbai Fire Brigade are related to fire incidents in the city, said Hemant Parab, Chief Fire Officer. While about 40 per cent are calls for rescue, such as in the case of a drowning incidents, during floods, tree collapses, and bird and animal rescue, 2-3 per cent of the calls are house collapse calls each year, the remainder calls are in case of various incidents, such as, in case of road and rail incidents, oil spillages, chemical spillages, and natural disasters, such as cyclones.

Parab said, “The fire brigade continues to attend to fire calls and other incidents till date, with an average response time of four to five minutes. False calls are dealt with as per the situation, and are punishable by law.” 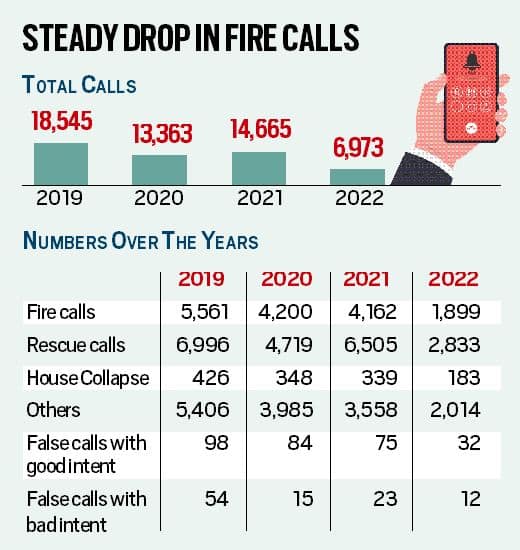 The brigade has been demanding that its firefighting duties be separated from the other duties to reduce the burden on them, to ensure focus on attending to fire calls, and on fire safety compliance in the city.

Prakash Devdas, president of the Mumbai Fire Brigade officers union, said, “We have demanded that our firefighting duties be separated from other duties. We have sought a division of our duties into three: Firefighting, rescue operations, and compliance duties. However, this has still not been taken seriously by the administration. We are told that while separate vehicles are provided for each of the duties, manpower remains the same. In fact, some years ago, one fireman died while rescuing a bird stuck in a high voltage electric wire. We will be taking up the matter with the municipal commissioner again.”

No Occupancy Certificate to new projects until water connection certificate availed by developer: BMC to HC