Brown girls in the ring


It has been a remarkable week for India’s influence on the world.

Just a few days ago, Indian model Nidhi Sunil was announced as L’Oreal Paris’ global brand ambassador. The 33-year-old Bengaluru-raised and New York-based model is an environmental lawyer as well as a spokesperson for the Invisible Girl project, a not-for-profit that aims at ending female infanticide in India. In a matter of hours after the announcement, denim brand Levi’s followed suit with naming Deepika Padukone, India’s biggest female actor and among its highest earners, as its global brand ambassador. On Thursday, Louis Vuitton premiered a new handbag with Padukone as its model, her second with the luxury label in a year. 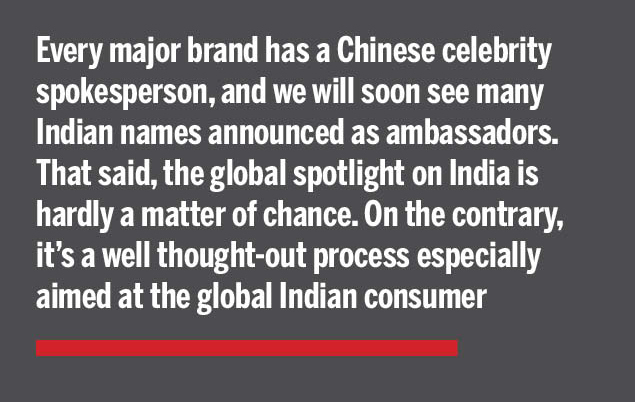 Padukone and Sunil are both tall, slim, and beautiful women. They are also delightfully brown-skinned. Seeing the two as faces for two global retail giants is no short of a phenomenon. Sunil, who has often spoken against colourism in the West and in India, has stated, “I don’t think they’ve had an Indian ambassador who’s a model and who also has darker skin until myself. Frankly, I’m an opportunist so I think it’s amazing to have a larger platform for all the causes that I speak for.” Padukone, who has regretted endorsing fairness creams in the past, has dropped all further promotions for them.

In New York, the renowned luxury department store announced a month-long promotion with Sabyasachi Mukherjee. The collection comprises Indian-wear, heavily embroidered India-inspired western wear, and sling and bucket bags redolent with Indian motifs and workmanship. In the four weeks, the collection was a sell-out.

Our home-grown Paris Couture Week perennial, Rahul Mishra, has been showcasing his collections digitally for the past two seasons (and physically since 2015) to favourable international reviews. His elaborate 3-D embroidery seems to be getting lapped up by the global press. “Your geography is always mentioned. I will always be that Indian designer, just like Issey Miyake is still a Japanese designer and Elie Saab a Lebanese designer,” Mishra says.

Brands must show inclusivity via multi-race brand ambassadors and participants. Every major brand has a Chinese celebrity spokesperson, and we will soon see many Indian names announced as ambassadors. That said, the global spotlight on India is hardly a matter of chance. On the contrary, it’s a well thought-out process especially aimed at the global Indian consumer.

With a half-Indian vice-president in the White House, and several persons of Indian origin working there, and 40-year-young Rishi Sunak taking charge of the Covid crisis in the UK as Chancellor of Exchequer, Indian faces have had the spotlight trained on them in the two countries. 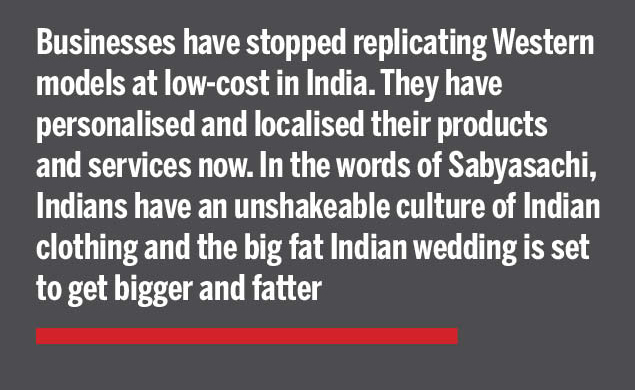 By 2030, India is said to witness a quadruple growth in its consumer spend. It remains one of the youngest countries in the world. The children of India’s liberalisation — its millennials and Generation Z — are set to become a major consumption pool and will spend more than their predecessors. The total of Chinese millennials (415 million) and Indian millennials (440 million) comprise 47 percent of the global millennials, or, as Financial Times calls them, “the world’s most powerful consumers”. They account for the majority sales in top brands, for example, 50 percent of Gucci’s and 65 percent of Yves Saint Laurent’s sales.

With more than one billion internet users, India will be a far more informed country and will demand more transparency from brands. In less than 10 years, India is predicted to move from being an economy led by the bottom of the pyramid to one led by the middle-class, and thus drive more consumer spending.

Your geography is always mentioned. I will always be that Indian designer, just like Issey Miyake is still a Japanese designer and Elie Saab a Lebanese designer

But international brands have been here before. Between 2005 and 2010, India was at the cynosure of several global brands’ vision thanks to its open market and gargantuan population. The year 2015 was predicted to be the year where luxury businesses in India would peak. But unlike China, we shunted out or downsized almost every major fashion business that didn’t invest emotionally in India or didn’t cater to Indian consumer behaviour.

Businesses have stopped replicating Western models at low-cost in India. They have personalised and localised their products and services now. In the words of Sabyasachi, Indians have an unshakeable culture of Indian clothing and the big fat Indian wedding is set to get bigger and fatter.

India’s values and attitudes towards luxury differs those in China and the West. While others may consume luxury as a desire to own expensive products or avail of high-end services, for Indians, luxury is connected to quality of life. Indians are less interested in the product, and care more for their own ability to spend. Moreover, India is a savings economy unlike the West, which runs on credit. Every brand would want a piece of this pie.

(Disclaimer: The views expressed here are the author’s own)


From the same author: